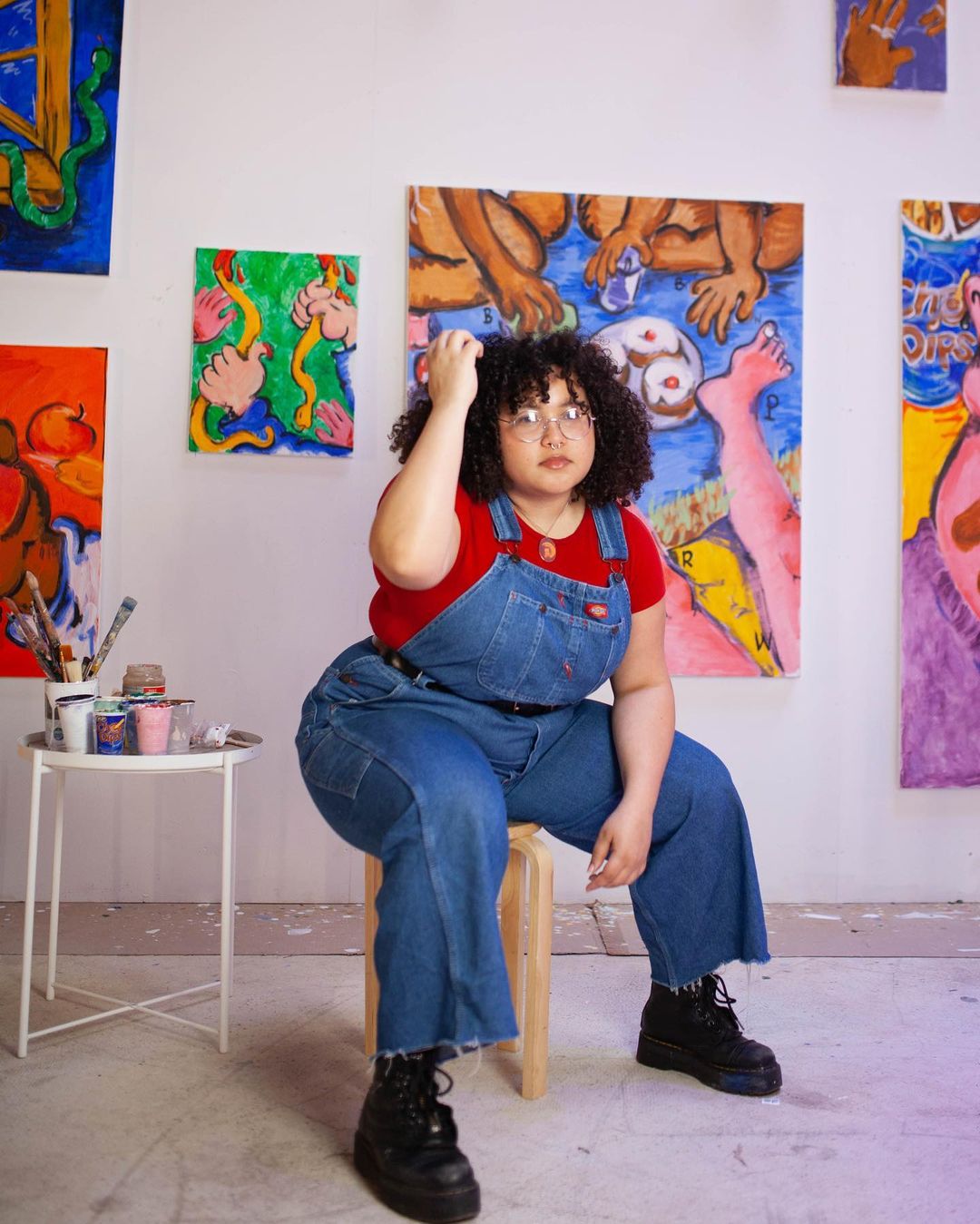 PORTRAIT OF AN ARTIST: OLIVIA STERLING

We caught up with the painter midway through her new Goldsmith's CCA exhibition, exploring the politics of Britons’ obsession with fake tan.

Olivia Sterling’s paintings might seem nothing more than a fun, multicoloured take on childrens’ illustrations. Sure, your eyes wouldn’t be deceiving you – the bright, poppy characters could’ve been lifted from the likes of Pass the Jam, Jim! or a saucy seaside postcard from fifties Blackpool – but take a longer look and you’ll discover a whole lot more.

Seemingly innocuous birthday parties see white characters’ hands clenching butter knives and Black characters’ arms are groped, gripped, and grabbed. Meanwhile, tiny letters – ‘P’, ‘B’ and ‘W’ – label each individual’s skin tones. Combining slapstick visuals with hard-hitting comments on race in British culture, Sterling’s poppy style of painting cleverly belies an undercoat of tension. It might take a second glance to see the bigger picture of microaggressions, violence and control, but by then you’ll be on your third, fourth and fifth to further explore.

Graduating from RCA in 2020 and racking up a host of group exhibitions (Guts Gallery, Galerie Droste) and residencies (Fores, HQI), Sterling was recently asked by Goldsmiths CCA to contribute to their Episodes series, an experimental platform for emerging artists. Titled Really Rough Scrubbing Brush, her current exhibition interrogates white Britons’ obsession with fake tan and the crass appropriation behind the mass application. We had a quick chat with her to find out more.

There’s such a rich, picture-book quality to the colour that you use in your paintings – where did this stem from? Have you always thought in multicolour?

Thank you! I have, I mostly draw from cell-animation cartoons (Looney Tunes, Tom & Jerry) and Terry Pratchett’s book covers are burnt into my memory. I am always aiming for my paintings to give off a warm welcome in order to draw the viewer in to take in the themes at play. In the same way that the letters float around the canvas, it’s like a carrot being dangled as people often want to find out what’s going on.

Is humour involved in your paintings, or is it just the visual style that is comic? If so, why is it important to weave this in?

There is humour involved, the type of laughy groan after a British person makes a polite joke. I heard a good example of it when I was with a group of English people in Germany, someone made a joke and we were all too tired to laugh properly out of politeness. A sad groan that admits that you have to laugh otherwise what else can you do? Mope? Humour is also a kind of byproduct of the work because the paintings are in between everydayness and absurdity which often looks quite funny.

I’d love to hear more about your new work for the Episodes project – what is British culture’s view on tanning, and how does it juxtapose with its systemically racist, negative depictions of darker skin?

Big question, British culture’s view on tanning is quite an innocent one which is what I am trying to make fun of in the exhibition. How can one not make it about race when you are changing the colour of your skin? You are literally changing colour. So, as a kind of sidestep the figures use food to change their skin colour highlighting the attitudes of color blindness or this superiority complex that we sometimes have – “no, no it can’t be about race”. In the same way, because people don’t see the connection this in itself highlights the way we have been taught to think – that these such things, the way we look, the way we feel about ourselves isn’t influenced by anything systemic.

Which is more interesting – painting bodies or objects?

That’s very hard – but maybe objects seeing how objects have their own unique essence which changes in every painting. Recently I have been painting white plates and dining tables about the to-and-fro, building up the layers (i.e the shine of the plates, the grain of the wood) and that has been a lot more fun than forming bodies.

THE SHOW MUST GO ON
FOR MILLI BHATIA

GET TO KNOW:
LAINEY WILSON