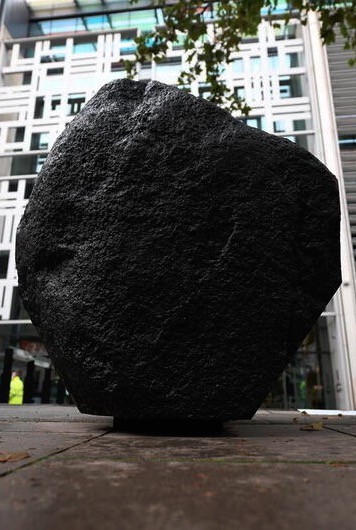 A surprise delivery to the Department of Environment, Food and Rural Affairs, Banner’s boulder solidifies a new object: the ambush sculpture.

Yesterday morning, a one-and-a-half ton granite rock labelled ‘Klang’ clattered with nominal force outside the UK Department of Environment, Food and Rural Affairs (DEFRA). Just hours later, before it’d even had time to mark out its colossal imprint on the cobble, it was whisked away by disgruntled police to an undisclosed location.

This wasn’t some sort of large scale flytipping (though culture-deniers like Rishi Sunak may have it so). Instead, it was a blocky sculpture organised by Fiona Banner in conjunction with Greenpeace, fabricated into the form of punctuation and dyed with pungent squid ink. It represents the charity’s ongoing project to fill marine-protected area Dogger Bank (stop it, you) with huge boulders, to prevent fishing boats pulverising the ocean floor.

Two other sculptures – Peanut and Orator – were loaded onto Greenpeace’s London ship the Esperanza, ready to be belly-flopped into the sea in the near future. It’s art with a purpose; form with function, a pseudo-object somewhere between sculpture and bollard that buoyantly plays with the viewer’s perception. Could the DEFRA, the piece asks, not act so urgently in saving marine life as it was disposing of a monolithic sculpture? Why was that more upsetting or unsightly than actual environmental destruction?

Simultaneously, though, it taps into a new form of object we’ve seen emerge this year: the ambush sculpture. Namely, urban installations that arise unannounced, overnight, almost seeming to materialize at a molecular level before swiftly being cordoned-off or confiscated, often as quickly as they first appeared.

Bristol, unsurprisingly, has been the epicentre of this. July saw the city ambushed with a sculpture replacing the toppled likeness of slave trader Edward Colston (which, incidentally, was also thrown into the sea). Overnight, armed with a lorry and ten crewmembers, it was replaced with Marc Quinn’s sculpture of Black Lives Matter protester Jen Reid. It was a triumphant replacement that took toppling one step further: topping it with a subject who deserved statue status.

Just last month, a moving sculpture of a forlorn man sitting alongside a teddy bear popped-up on an archway of Bristol’s Jacob’s Well Road. Erected in time for World Suicide Prevention Day, it showcased how sculptures can prove to be powerful reminders of things too important to forget, not just monuments, but mementos (literally, in Latin, ‘Remember!’) The anonymous artist behind this also populated the site of Colston’s statue with a string-vested, beer-bellied man, as well as angels in the bearpit and an OAP called ‘Ruth’ on Victoria Street.

It matches-up with the city’s taste for the spontaneous. Illegal raves pop-up and pack-up in a matter of hours in Bristol (or, in nearby Bath). Banksy, equally, still roams the graffitied streets at night, creating art without a thought about planning permission. It proves that art doesn’t always require council plans, grants or paperwork.

Some of these ambush sculptures, like ‘Klang’ and Marc Quinn’s, are whisked away; others remain. What’s important, though, is that they can never be unseen. Whether witnessed by dozens, hundreds or thousands before being dismantled or cordoned-off, they stay solidified in the experience of the spectator. Pictures may paint a thousand words, but sculptures can rock you to the core, stunned, literally petrified.

It’s unknown as to when Banner’s other two rocks will plunge headfirst into the seas, a dual blockade to illegal fishing boats. But the afterimage of the work, the permanent marks on the pavement and the police report will never go. Physical art demands space and attention, and if it ambushes the spectator, if it catches them unaware, then all the better. Just next time, if you work for DEFRA, think twice about where you park your car in the morning…

The Effect Of The Earth’s
#10YearChallenge