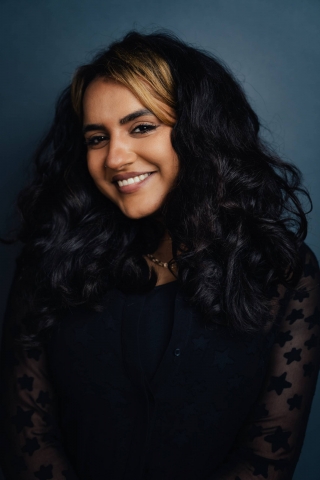 THE SHOW MUST GO ON FOR MILLI BHATIA

Director and Dramaturg, Milli Bhatia is bringing forth a new era for diverse and emerging creatives in the West End.

With the West End up and running once more, many creatives are looking forward to getting back to work, no one more so than Milli Bhatia. An alumnus of several theatre companies which have sought to nurture and uplift diverse talent, Bhatia is opening up the world of theatre to be more accessible than ever before.

Directing several stimulating bodies of work and working with some of the most up-and-coming writers in the theatre space, Bhatia’s most recent pairing comes with being once more reunited with Jasmine Lee-Jones to resurrect ‘Seven Methods of Killing Kylie Jenner’ at The Royal Court Theatre. Since she was young, Bhatia has wanted to be a storyteller, at around 14 years old she auditioned to be a member of the National Youth Theatre but storytelling has always been in her: “I always knew I wanted to be in theatre and live storytelling in some way. From a really young age I did all the school productions and was really kind of passionate about it as a teenager. In my spare time, I wanted to be making plays.”

Bhatia’s first ever directing job was during her time at university. She directed The Vagina Monologues for the Norwich-based charity Leeway – who support victims of domestic violence and where she was a volunteer at the time. This was a very particular pick for Bhatia as she felt as though the play, though cited at the time of its inception as being “probably the most important piece of political theatre of the last decade” by the New York Times, Bhatia felt that it still lacked the representation that women who looked like her so desperately desired.

“I loved that it came out of a real need to address something I felt an injustice about. I think I really think about, you know, the political need underneath the reasons that I’m at work is to maintain and grow, but it’s really interesting to think about at the beginning of my journey.”

From Bush Theatre to Birmingham Rep, Bhatia has worked in a number of art spaces, some more accommodating than others. Working on Seven Methods of Killing Kylie Jenner at the Royal Court Theatre, she tells us, was unique, “I’m very lucky that Royal Court never would push me towards a certain team. They would always say ‘work with who you love, who you want to work, who brings the work alive for you and who makes you feel excited’. They really do empower directors to have agency over that process.

For Bhatia and Lee-Jones (the play’s writer) casting both for both on stage and behind it was a no brainer. “Jasmine’s always been incredibly clear about who this play is for, and it didn’t feel right to include whiteness in the space.”

Seven Methods stars and is produced by an all-female cast. The only two starring characters (Cleo and Kara) are Black women and the play itself is written for an audience who have more of an affiliation to new-age social media spaces, in particular Twitter. It speaks to a younger audience, a conscious and ever-evolving audience who are seeking more from the theatre productions they attend.

Bhatia is brave with her work and those she chooses to work with in turn. Finding herself nurtured in a space which has more often than not been unkind to women of colour, sees her able to push boundaries and as a result seek to find resolutions through and in the works of others. But outside of the Court, her favourite projects have included “her first ever professional show”, The Hijabi Monologues at the Bush Theatre, which was thanks to Madani Younis (previous Bush Theatre Artistic Director 2011-2018) who told her “Yeah, you can do this, go do it!”. The show was where Bhatia also met Stage Manager Sylvia Darkwa-Ohemeng, who has continued to work with Bhatia ever since, even working with her on seven methods.

So what’s it been like returning to the art space in the midst of a global pandemic?  “I actually made a lot of work during the pandemic, it feels quite funny to say that.” Bhatia has been amazed by the outpouring of creativity which has sprung from her community. From virtual readings, collaborations between writers and directors and even being involved in the making of short films which she of course, directed remotely. Bhatia even got to rework some classics such as My White Best Friend and then of course rehearsals started for seven methods. It wasn’t all smooth sailing though, as the show had to shut down for a week due to a positive covid case and then soon after a flood inside the venue meant things were delayed even further. “It was an interesting challenge to learn how you create a sense of real intimacy when you have to be two metres apart.” she tells us.

Bhatia’s parting words of wisdom to South Asian and other women of colour who are thinking about entering the theatre space, “Don’t apologise for your space. It’s taken me years to unlearn that, and don’t shrink yourself to make other people feel comfortable.”

Seven Methods of Killing Kylie Jenner will be available to watch online early next year via www.royalcourttheatre.com

MEET THE MAKER:
THE WOMEN BEHIND 'MADE FOR LOVE'

Moulding My Own World
Meet Clay