40 years on: remembering Punk, not replicating it

Stumbling across the British Library this summer, you may notice something subtly different; the world’s largest book house has been defaced. It wasn’t someone scribbling phallic images on Jane Eyre or seen tearing a page out of Pride and Prejudice, but was instead one of the library’s guest speakers doing the scrawling.

Viv Albertine, guitarist of 70s punk band The Slits, left her mark on the library’s summer exhibition ‘Punk 1976-78’ with a gentle reminder about the women involved in the movement. Albertine took to one of the panels to eradicate the mention of male punk bands, Sex Pistols, the Clash and Buzzcocks, replacing them with “The Slits, X-Ray Spex, Siouxsie and The Banshees. (What about the women!!)”. The scribbling is a minor punk statement in itself and one of the only authentic ones around in the 21st century. It’s been allowed to remain, presumably because of Albertine’s role in the UK part of the motion which lasted those fragile 24 months or so, 40 years ago.

That’s where punk should stay; in those sealed glass cases, the fashion, art and music preserved as it was. At the time being a punk was about going against the norm. The technique of détournement, that is, turning expressions of the capitalist system against itself, used by these new visionaries was a staple in how punk’s rebelled against convention. Fashion designer, Vivienne Westwood, admitted herself that she wanted to see if she could “put a spoke in the system in some way”, and so the almost taboo images of safety pin piercings and bondage wear become so synonymous with punk. The Sex Pistols similarly produced a zine, ‘Anarchy in the UK’, aimed to promote a visual identity for their fans. These days it’s easy enough to mock-up your own t-shirts or print your own zine but remember that you’re not the first to do it. That’s something the British Library itself seem to have forgotten, creating their own ‘Punk Pop up Shop’ including re-pressed vinyl, too clean cut to indulge in, and nonsensical t-shirts. It’s laughable that lack of originality still has the ability to cash in on people’s nostalgia. 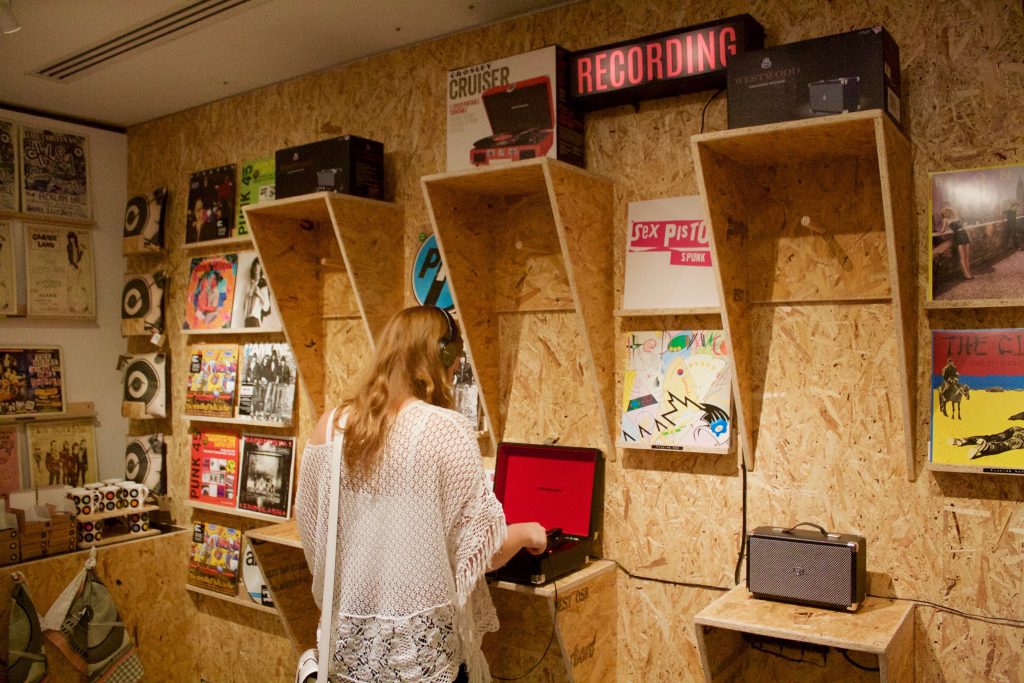 In terms of music, there is nothing less appealing than a record label describing their latest signing as ‘punk’ because simply put, they are not. Punk was based on a shock factor not available at the time through the mainstream media. It stood nose to nose with the establishment, growling at its faltered authority. Nowadays your favourite new band may thrash their guitars and spit clueless lyrics that skim the surface of political protest, but they’re never fully involved in the issues they preach about because that would risk losing their six figure record deal.

It was the instability that made punk so unique and thrilling to youngsters. The Roxy Club opened in 1977 by The Clash closed four months later, proving the movement’s short but exhilarating shelf life. Offstage, bands caused anarchy, pushing boundaries that we’re unlikely to see replicated again. At the end of 1976 Sex Pistols set out on a rampage with guitarist Steve Jones calling interviewer Bill Grundy a “dirty fucker” on live TV. By the turn of the year the band had churned their way through two record labels; firstly, being dropped by EMI for “vomiting their way” to a plane whilst hungover and then just six days after signing for A&M Records, they too pulled the plug after the band turned up to their offices intoxicated, smashing a toilet in the process. It was something never seen before. These days, labels only consider dumping an artist after half a decade of stale albums.

At a time when our country has cut ties from Europe with the opposition party in tatters, people are left scratching their heads but no one’s doing anything about it. Punk was all about provoking a response to the situation but it’s something bands daren’t go near now. Perhaps the closest thing we have to punk in the UK right now is grime music which is giving black minorities a voice and questioning why their work is looked upon less favourably when it comes to awards and recognition. But that doesn’t mean in forty years’ time Camden market will be shifting replica tracksuits whilst Skepta and Stormzy blare through the speakers. It’s time to move on; let’s remember punk for how defining it was, not try to replicate it.

Proud to be Black
Words from Victoria Monari

Afrobeats
is a rich, unique and beautifully complex genre in it's own right

Jordan Stephens
is up in space