“By order of the Peaky fucking Blinders!”

Ah, the Shelby family. They’ve been captivating audiences since 2013 – and how we love them. Now, with the fourth season of Peaky Blinders upon us and in full swing, it’s high time to celebrate the fashion of Birmingham’s favourite family, don’t you think? How to stay stylish, while living a life of crime.

The way that the characters look is a huge part of the show. Such is the influence of the Peaky Blinders style, Steven Knight – the writer and creator of the show – launched his own clothing company named Garrison Tailors back in 2016. From the sharp suits to the tweed caps – and, of course, the undercuts – the Shelby look has slowly been creeping its way into real-world fashion since Tommy first rode in on that horse during season one. Now, it’s everywhere.

So, without furhter ado, here’s your guide to staying suave and scandalous.

Facial hair is not for everyone. Nor is a full-bloodied lifestyle fuelled on sex, drugs and alcohol. Nevertheless, someone who fits both bills is the imperious Arthur Shelby. Arthur’s moustache is signifier for his archetype as a different kind of Shelby brother. And, with everyone else being clean-shaven, he is the only one to show accurate significance to the era. It is almost Russian revolution vibes – and we love it.

The newsboy and flat caps were known as the ‘working-mans’ hat. Add some razor blades in the peak of the cap, and this is how the Peaky Blinders got their name. Sales of the flat cap have reportedly risen by 85% since the show came to our screens – and they’ve also been seen on the catwalks of Gosha Rubchinskiy for Fall/Winter 2018 and Prada. It is a truly British accessory encapsulated by the brothers of Small Heath, Birmingham.

Tommy Shelby wears a single-breasted overcoat made from heavy wool, and a black velvet collar. Tommy’s wool number is used to relay a message of business to the audience, as it is a coat mainly worn in the city, where business is a booming. Overcoats will never run out of fashion: they are consistent in the industry. Aquascutum and Burberry are the key to classicism and matching the Peaky fashion, while recent trends – in the form of oversized black overcoats – are coming in courtesy of Balenciaga. 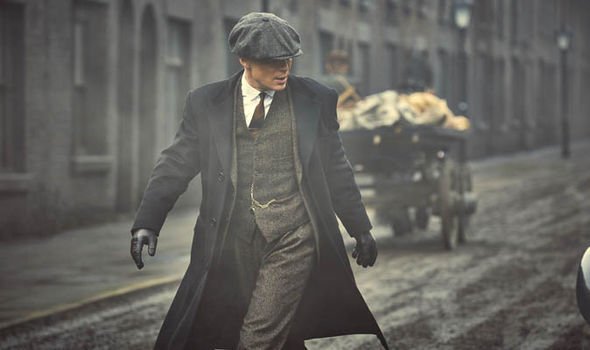 We cannot exclude the Peaky Blinders’ women from the fashion file. As they say, ‘behind every successful man is a strong woman” – this couldn’t be any truer for the likes of the Shelby brothers, backed up by some of the strongest women television has ever seen. They dress great, too: the Cloche Hat – rocked by Lizzie – gained popularity in Couture houses in the 20’s from houses such as, Lanvin and Molyneux.

Can you hear that It’s the sound of barbers shaking at the thought of how many men are going to demand the, ‘Tommy Shelby haircut’ after last night’s episode. A haircut can make or break an outfit, and it can also implement confidence within a chosen style. What the characters do so well is create a typically notorious ‘gang’ haircut, and make it look clean, suave and stylish. Full marks.

POST-BOOHOO:
HOW TO SHOP MORE SUSTAINABLY

Stussy x Nike:
Perfect for all your isolation needs

GOODBYE HELLO:
INSIDE THE POETIC WORLD OF LP