After touring with Imagine Dragons and the release of an incredible debut album, ‘Very Rarely Say Die’, Sunset Sons hit the road for a UK and European tour.

A band definitely on the brink of stardom. Pop songs hidden behind a wall of rock influence, each delves into a heavy mannered track of laden guitars, dominating vocals and subtle piano patterns.

We phoned Rory of Sunset Sons to talk pranks, recording the big debut and festival must haves.

Hey, how are you?

Where you off to? You all must be exhausted!

“Yeah we’re all pretty tired but it’s all good! We’re going back to France so it’s always very go go!”

Well, how has tour been?

“It was honestly an absoultely amazing experience, we weren’t expecting to get the reaction we did. Obviously, when you’re going on tour you kind of expect people to enjoy it but so many of the shows sold out and the album hadn’t really been out that long! People knew every single word which put me on my toes a bit because I had to make sure I remembered all the lyrics! Yeah, the tour was awesome and we’re just coming to the end now.”

What a shame! What do you think has been the best show?

“You see it kind of varies because last night we played our first show in Italy and it was a tiny tiny little venue and we turned up there in Milan, you know we’ve never played in Italy before so we didn’t really expect people to know who we were. But we turned up and there were people that had been waiting outside since 10 in the morning with presents and it was just a really warm welcome! It was only like 150 people at the show but it was just such a great gig!”

“But then again, you play Manchester and London and the shows are the biggest shows we’ve ever been involved in on a headline show and they sell out so quickly so you’re just excited from day one and they were great! The UK tour was really special and then Europe, I don’t know, we just didn’t really expect it to be as good as it was. And it basically just blew all our minds, every night it was just people knowing who we were!”

It must all feel really surreal, all of that!

“Yeah it is! Just because, we’re still the same guys hanging out doing the thing we know we can do and at the beginning. no one really cared and now we’re here!”

Yeah and you recently finished touring with Imagine Dragons! How was that?

“I don’t think it’s even hit us properly! It was ridiculous, like we did an arena tour for 38 days! We did two nights at the O2 and the final show in Amsterdam was ridiculous, it was 16,500 people in a country that we had only ever played once in and everyone was into it and just the reaction we got at each gig was amazing! I think, together, even though we play different music, it worked really well together. And we got on with the guys as well which always helps!”

I saw some pranks went off on the road with them, do you think you’ll carry that on to other tours?

“Definitely! I mean if you can’t have some sort of fun, like a few pranks, with the other bands, it’s what it’s all about, I don’t know we’re all about just getting on with people who do the same as we do!”

“We had a guy with us called Louis Berry on our UK tour and him and his band were just the best banter, honestly we just became really good mates and luckily we’re doing quite a few shows with him this year. He’s definitely a new kid on the scene and he’s just a good guy, really passionate about what he does!”

“I think you get a lot of bands these days that try and have the whole Blur and Oasis kind of rivalry, it can be a jealousy thing – and don’t get me wrong, we get jealous of other bands that are doing better than us but I think that’s a good thing, we’ve got the healthy competition. But it’s also nice to be able to hang out with other musicians, like you spend a lot of time on the road, we spend all our time in a van and venues and it just makes it better when you can have some fun, so we’ll continue the pranks don’t you worry!”

Definitely keep them going! So you guys started off by doing covers together, what were your favourite tracks to do?

“We used to do ‘Make It Wit Chu’ by Queens of the Stone Age, actually anything by Queens of the Stone Age was always a winner in my books! We did a bit of Kings of Leon, The Beatles, you know every song we ever covered, 99% of the time it was because we wanted to! Every now and then we’d do one and at the beginning, I’d love doing it but then it would get requested more and more and it kind of become a drag!”

Kind of got ruined for you?

“Yeah, like just playing it because people enjoyed it. We used to play a lot of Mumford and Sons as well which I used to love but we over did it! We were like “I don’t wanna play ‘Little Lion Man’ again please!” but yeah, we used to play the classics like The Who, I loved playing The Who actually!”

What would you choose now to cover? Would it be the same?

“There’s a guy called Gary Clark Jr. who has a song called Bright Lights, actually, I love that album and would happily cover any of it!”

Do you think you’d do some covers while on tour?

“Yeah definitely, we did one when we were in Stockholm on the tour. We had a really good friend of our who we used to jam with come up to play Dancing In The Dark by Bruce Springsteen, it’s a tune we used to play together which was really cool! That might have been the only cover we played on tour actually, obviously, it’s been an album tour so we’ve been focusing on the album but last tour we were playing Jamie T which we put our own little spin on. We actually played that at Glastonbury too, he was playing there so we thought we’d show our appreciation!”

Oh that’s so nice! So, congratulations on the release of your debut album! How did the recording process go?

“It was long! The whole experience was amazing – I need to stop saying amazing, I say amazing for everything! It was just really interesting because we did in a lot of different places, so we started in Nashville which was out of this world really! It was in one of the best studios in the world, it’s a studio called Blackbird and it had a real welcoming vibe, I mean, the people who’ve recorded there definitely made it historic. And you turn up there expecting some egos of some kind and it was just the opposite, we were welcomed with open arms and it was really good!”

“The minute we got back from Nashville, we were back on tour which was awesome because we had been played on Radio 1 so by the time we got to shows, everyone kind of knew this one song. Whilst that was happening, we were also writing quite a bit during the summer and festivals, so we got near the release of when it should have been coming out and we had realized that we had all these new songs. For a debut album, you have to put your best foot forward and we were just like “you get one shot at a debut and if we don’t put these songs on there, we’re gonna be upset.” So we ended up going back into the studio in London and France and just postponed the whole album until it was in the right place and we’re very proud of the album. I’ve only listened to it a couple of times haha, but when I have I’m very proud of it. And the whole experience, I don’t regret at all! The fact that it took longer than it was meant to was just meant to be!”

Yeah, I guess you want a collection of songs that you love, you don’t just want to put out an album!

“Yeah and you know, we’re not one of those bands that wait for someone to give us a song, we do a lot of writing and when we’ve been soundchecking on this tour at the moment, there’s ideas just flying around while we’re checking guitars, pianos and stuff. It’s kind of, not a burden, definitely not a burden, but we’ve always got more songs than we know and trying to pick, like every song that you write is like your little baby, trying to pick the best ones is kind of difficult but we managed to get there, we think!” 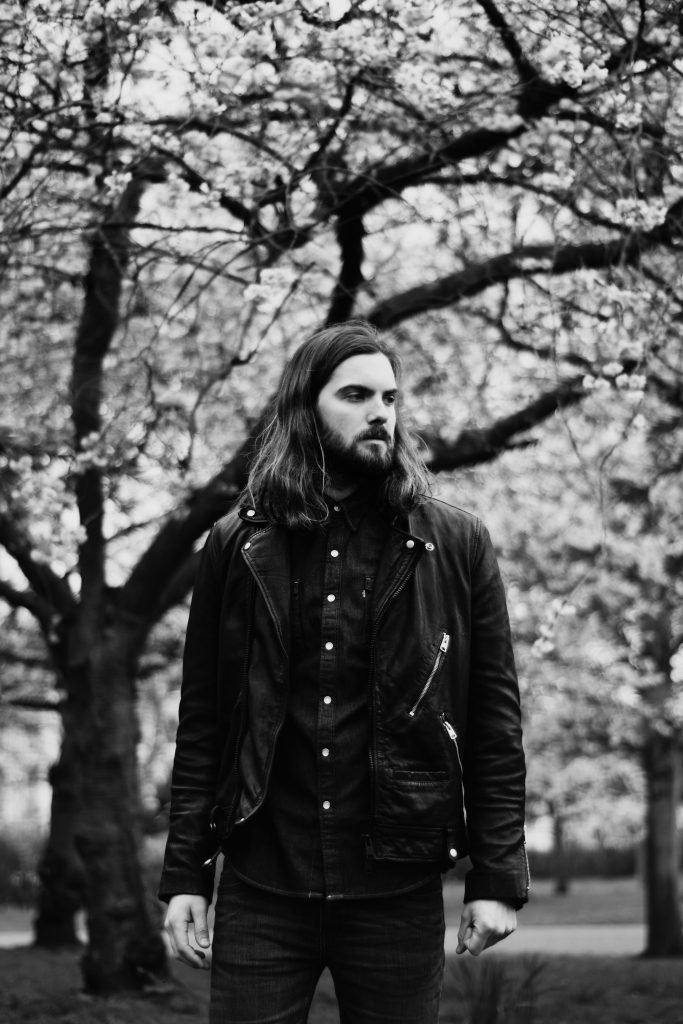 I definitely think you chose the right songs for it, the album is incredible! Now that festival season is coming up, what are your must haves?

“Oh we were talking about this, what was it? I’m gonna ask the boys! Ok, must haves, a good jacket. Everyone will be running around in their shorts and t-shirts and before you know it, the sun starts going down and you’re never going to be in bed before 1 o’clock so a good jacket. Sunglasses. Minimal luggage, like if you have a bag with you the chance of losing it all is pretty high! I’m totally supposed to say something rock’n’roll when I’m totally not! A charged phone, always have a charged phone. Plenty of cash! Or take your own booze, the minute you get in there, we’re lucky because we get free booze on our rider but always take a hip flask, even though they’ll probably chuck it away!”

Never know, I was at a festival last year and they let me walk right in!

“Really!? You know, I think nowadays it’s pretty chill, like there’s a few festivals with a lot of families that we do and I’ve seen people check it more than usual.

Oh actually, I saw something amazing one time! I saw someone had filled a sun screen bottle with rum or some kind of booze so just never go for an everyday kind of juice bottle and you’ll get away with it!”

That is genius! Lastly, if you were to put on your own festival, who would you have playing?

“Headline-wise, I couldn’t even tell you! Everyone I’d probably want! I’d go Mystery Jets, Maccabees, Jamie T, Gary Clark Jr., Cage The Elephant, Queens of the Stone Age because I tried to see them a couple years ago at Reading and Leeds and cut a long story short, basically decided I was gonna go on a date with a girl instead, thinking I’d be able to see them the next day. Missed the gig, turned up the next day and it was a joint headline with Paramore so I was expecting Paramore to finish but I ended up watching half an hour of their set before I realised that Queens of the Stone Age had finished! So I wasn’t happy! They’d probably headline to be honest. Who else, Louis Berry!

I think that’s a nice line-up you’ve got there!

Get To Know:
Maisie Peters