The Buddies Are Back

You better believe it – the buddy romp is back.

Shane Black, the writer-director behind The Last Boy Scout, Kiss Kiss Bang Bang and the Lethal Weapon franchise has returned with The Nice Guys, another wisecracking helping of action-packed companionship, featuring Russell Crowe as a morally dubious bruiser alongside Ryan Gosling’s hopeless PI.

Whilst a harmonious reincarnation for the genre has been pushing for a little while now (think the Ride Along outings, 2 Guns, or Sandra Bullock and Melissa McCarthy in The Heat), nothing has propelled the buddy romp back into the cinematic El Dorado of dual critical and commercial success; until now.

With The Nice Guys, we have a film that is, actually, really quite good.

It’s funny, grand, violent and never threatens to take itself too seriously – all whilst painting a wonderfully sordid canvas of 70s Los Angeles. Black’s return to the genre he single-handedly birthed is an incredibly welcome one, whilst the casting of Crowe and Gosling is nothing short of inspired.

In the two actors, the film has secured two of cinema’s bona fide heavyweights, and it’s their infectious presence and on-screen chemistry that makes The Nice Guys the great piece of cinema that it is. Whilst the Jump Street franchise gave the coveted holy pairing a good go, Jonah Hill and Channing Tatum, admirable though they were, just don’t carry the same weight as Crowe and Gosling.  This weighty casting, and the subsequent acclaim for performances of the two actors, has provided the buddy romp with the credibility it has been lacking since the industry decided these kind of films weren’t cool anymore.

So what do I mean when I refer to the buddy romp? Although the term may be slightly dubious, it’s essentially a combination of the historic ‘buddy film’, the Hollywood action blockbuster as well as elements of the caper. Two characters (usually male, but by no means exclusively) are put together and forced into solving a plot predicament as a duo. This predicament (and this is where the good ol’ romp comes in) usually involves bringing an unsavoury character, or group, to some kind of justice, all whilst tackling explosions, gun fights and high-octane chase sequences.

The characters in question are always contrasting, with one tending to be more proficient in macho, John Rambo protagonism, whilst the other, although maybe slightly more morally correct, tends to provide the bulk of the frequent comic relief.

The film will end with these two characters, although in recognition of their accentuated differences, realising that they ‘couldn’t have done it without each other’, and their eternal friendship is solidified.

And THAT is why the buddy romp is bloody brilliant.

Sneer all you like, but I bet you saw Batman vs. Superman. The buddy romp combines the best elements of a handful of blockbuster genres (action, adventure, humour, and most importantly, platonic, same-sex friendship) and bakes them together at a high heat for 90 minutes. The result is a cinematic experience that is nothing other than just darn good fun.

Seriously, think how many films would have been improved if they’d have been given the buddy works. Liam Neeson could have given his infamous Taken speech to his daughter’s abductors, whilst his sidekick (let’s say Chris Rock, for example) chimes in with the occasional ‘you better believe we’re coming, bitch’ from over his shoulder. Samuel L Jackson’s reptile-hunting exploits during Snakes on a Plane would surely have benefitted from the assistance of a friend, too. I’d have cast a mongoose. What noises do mongooses make? I imagine they squeak. Either way, we couldn’t have it talking – as if Snakes on a Plane needed any more plot unfeasibility. God, I wish every film was a buddy romp.

The Nice Guys is an excellent piece of summer cinema; boisterously exciting, jaw-achingly funny and wonderfully acted by two fine leads who are clearly enjoying it as much as the audience are. A sequel is already being touted, and with Shane Black back working again you can expect his brand of big-budget camaraderie to be a mainstay for the incoming.

He’s currently working on a sequel to the 1987 Predator. Two cynical wisecrackers, one buff, the other banterous, taking on one of modern cinema’s most recognisable monsters?

Man, a boy can dream. 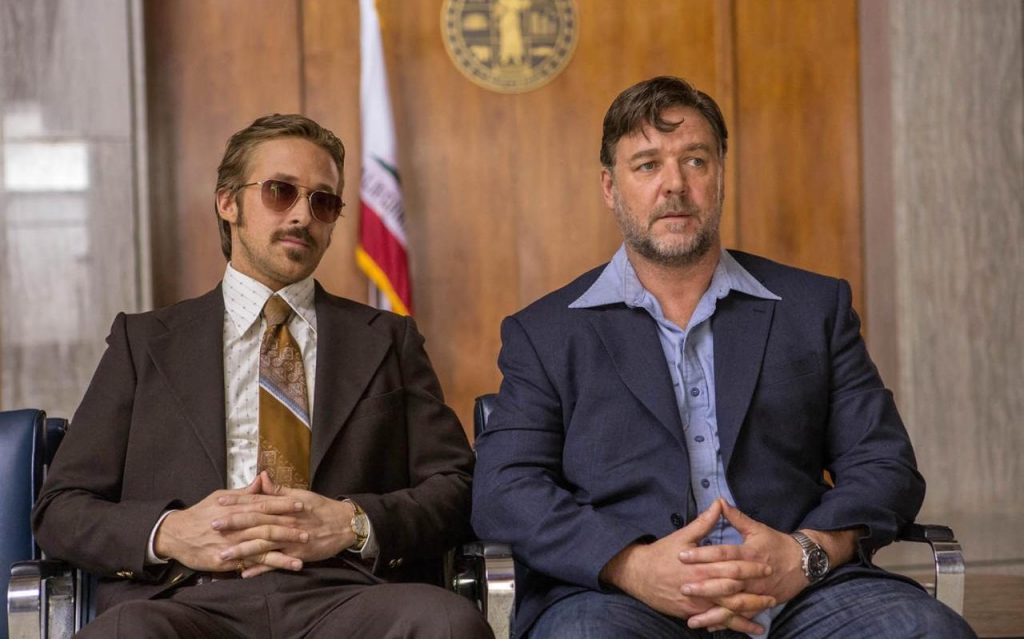 KATIE
CARVES A PATH TOWARDS HER ULTIMATE GOAL