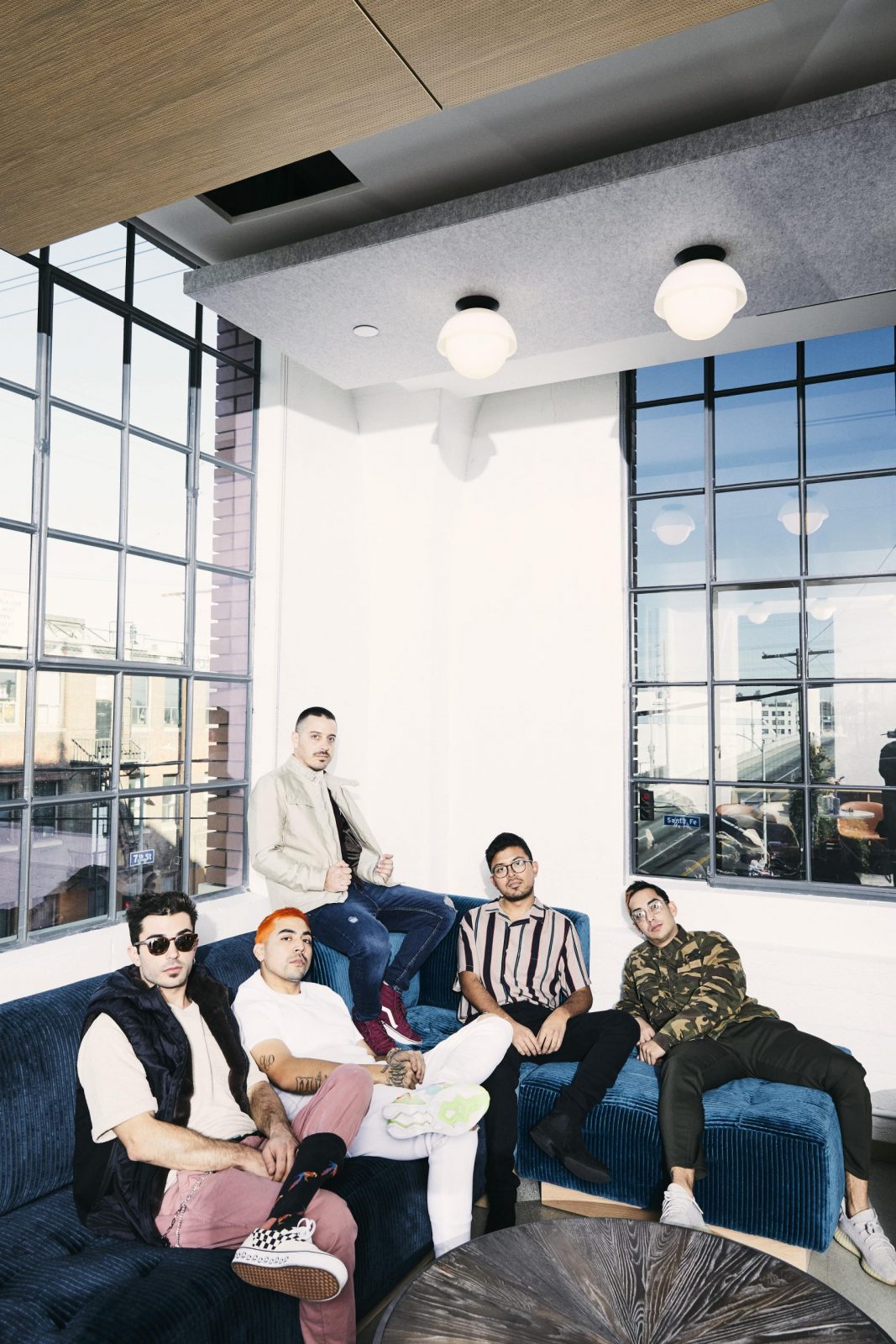 Garrett Douglas and Chris “DJ Irey” Garcia grew up in Long Beach, California, and live now around the city’s intersection of East 4th and Orange Avenue. It is the spot where 4th & Orange, also comprised of Ricardo Santiago, Alex Bursztyn and Sam Ward, grew into the pop-reggae group signed by Atlantic Records last summer.

Today (Feb. 6), 4th & Orange is hosting a housewarming party with their new single “In The LBC” and accompanying video debuting first at tmrw.

“It means that we should always remember where we came from in order to see where we are going,” Garrett, the lead vocalist, tells tmrw. “Anyone and everyone should be proud of being from the place they call home—especially in situations where their hometown helps them become who they are. Sometimes the people from your hometown are the first ones to support you and start the wave. That’s what Long Beach did for us. We are a very prideful city, so once the LBC gets behind you, you’ve got an army of supporters to spread your music to different places.”

The track takes listeners on a calming cruise. The consistent, reggae-based guitar beat matches sonically what Douglas sings about throughout—comforts that can always and only be found at home. The first thing out of Douglas’ mouth is, “Gettin’ high in the LBC.” As the song progress, it becomes apparent that taking the opening line literally is selling the overall message short: “My city runs through my veins / It’s in my blood / I can never get enough, never get enough / Gotta pick it up, gotta pick it up.”

The video, directed by Michael Garcia, sees Garrett coping with distant police sirens by lighting up. Beautiful beach shots balance out the more difficult realities of his surroundings. He sings, while standing on the corner of 4th & Orange: “My mama prays for me / Every time I walk through the door to leave / It’s written on my chest / I stay where the life is / ‘Cause where I’m from they say that life’s a beach.”

“In The LBC” doesn’t gloss over anything. It shows the city fully, even the rougher edges, and embraces it for all that it is. 4th & Orange feels good doing it, too, and listeners are sucked into their feel-good vibe.

“It’s the yang to our yin if you will,” Garrett says. “What I mean is, 4th & Orange is made up of a combination of backgrounds—a vast range from a popular culture upbringing to the exact opposite, which is a life in the streets. This track brings it all together. Our other releases were focused more on the poppy, melodic side of our creativity, but ‘In The LBC’ hits close to home for us, literally: on the corner of 4th and Orange in Long Beach, California.”

Long Beach will be even further ingrained into 4th & Orange’s story following their One Love Cali Reggae Fest set on Friday (Feb. 7). The group shares a card alongside Sublime with Rome. Sublime, led by singer Bradley Nowell, also originated in Long Beach and served as a central vessel of inspiration for Douglas especially.

“Bradley Nowell—in one song or another—spoke about his own life, but somehow explained my future,” Douglas explains. “This is something I started to notice as I was getting older. As a kid, I loved the feel of the music, but I didn’t understand the meaning of the songs. Mostly because so much of it was about getting into drugs, surviving depression and life on the road. I met all those things as I was growing into a man. I learned how to deal with those new points of my life because I’d heard it all explained to me in their records. It was like having a blueprint to life, and now I’m at a point in my life where life on stage is a reality for 4th & Orange. It’s always good having lessons taught to you by a mentor. Now we write our own stories, and a big reason why we know how to do it is because of Sublime.”

He later adds, while answering whether he has taken time to reflect on the gravity of sharing the stage with his hometown hero: “It hasn’t fully sunk in yet, but I’ve thought [about] this moment enough to know that my path is headed in the right direction. Being on the card alongside Sublime is validation for us. We must be doing something right, and that’s enough for us to work even harder every day.”

“In The LBC” was preceded by four singles. Building a foundation with “great and marketable songs for all ages” has, Douglas says, hopefully encouraged fans to “want to know who we are, where we came from, and what we’re like as people—not just a band they listen to.”

“Girl Next Door” was released as the group’s first single under Atlantic/Latium Entertainment in June and co-produced by DJ Flict, who not-so-coincidentally has also worked with Sublime with Rome, and Mark Pelli. Where “Girl Next Door” narrates mundane day-to-day tasks interrupted by a love interest, “In The LBC” is a love song to day-to-day life in Long Beach.

The official video for “Girl Next Door,” also directed by Michael Garcia, surpassed 2.5 million views on YouTube. If nothing else, that proves that 4th & Orange’s past offerings have resonated. More than that, it paved the way for even more authentic music to come forward.

“‘In The LBC’ is the beginning of our urban approach to this reggae genre we’ve embarked on,” Garrett says. “We love to express what hip-hop has done to us when it comes to learning how to make music and write songs. What better way to show the world why we have such a hip-hop-influenced sound than to make a song with those elements in it? And make it all about the city that has so much hip-hop [and] rap history? It’s going to be a good one for us, and it will being something great to look back on years into the future. It’s time to bring it home!”

INSIDE THE WORLD OF
LELE PONS

An Evening With:
Day6

GET TO KNOW:
RAINEY QUALLEY

DRU FLECHA:
FROM VENEZUELA TO THE WORLD