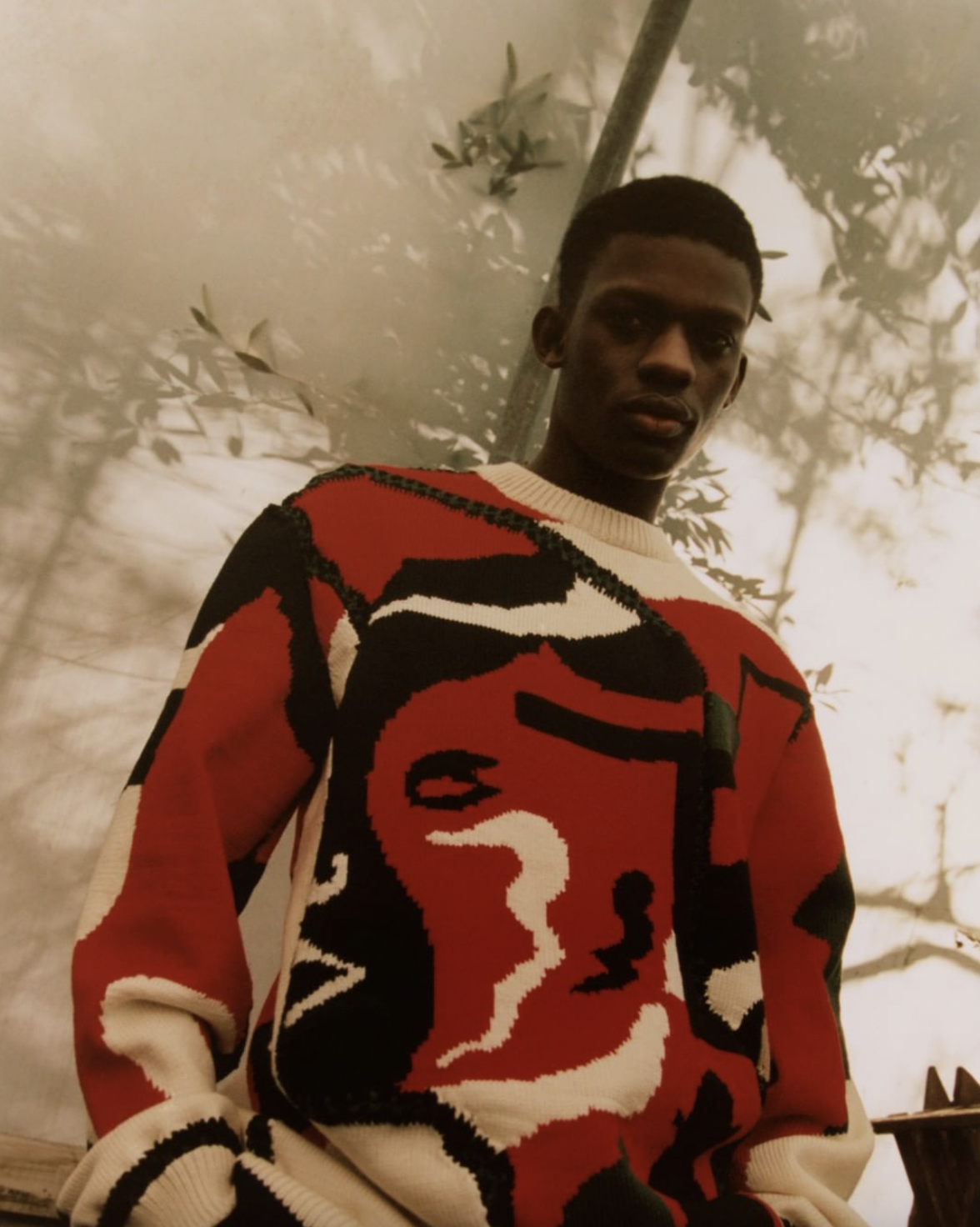 Coffee leather, screw-off buttons, knitted ballies and a dress made of whistles.

The Fashion Week calendar is a hotel breakfast buffet. Wait – stick with us – we’ve started with our freshly-baked Danish, gobbled-up our New York bagel and now we’ve just downed a London Fog. Unlike said Fog, Eunice was no storm in a tea cup, threatening to scupper plans with its gale-force winds and thunderous demeanour.

The show must go on (etc, etc) and it sure as hell did. Over the last few days, a haute-coterie of fashionistas have descended onto the capital, toing-and-FROWing between digital presentations and traditional runways. Sustainability is no longer tagged on as an afterthought; it’s now at the centre of LFW, a necessary consideration for emerging designers and legendary labels. While it may be a little more awkward for established houses to change their entrenched ways, grads and upstarts have the agility that a new brand brings, and boy are they walking with it.

Like how vegan food has gone from miserable to heavenly in a matter of years, sustainable fashion has led to exciting innovations and even-better-than-the-real-thing substitutes that were previously unthinkable. Ersatz? Err, yes! Now that it’s over, we’ve rounded up the best sustainable moments, from coffee leathers to patchwork blankets, rave whistle dresses to cactus jackets. Dig in, then it’s onto Milan – Panettone Milanese, anyone?

Queen of splicing and all things nice Bethany Williams returned with ‘The Hands That Heal Us’, a new collection backed by a digital presentation screened at the Design Museum. An ode to the many creatives and craftspeople involved in making her pieces, it celebrates ‘Our Makers’, ‘Our Hands’, ‘Our Tools’ and ‘Our Team’ via a trove of deadstock creations.

Denim, made with organic cotton and recycled hemp, is used for the first time, studded with screw-off buttons that allow the pieces to be upcycled in the future (though, you’re probably going to be wanting to keep these). Modular design runs throughout, seen in detachable pockets and tool loops, in case you fancied a spot of gardening in your best garments. Then, on a cosier note, there are upcycled blanket bags, Isle of Man wool knits and bamboo silk pyjamas, ready to wear next to a roaring fire (that you made yourself, naturally, you crafty devil!)

We couldn’t quite believe our peepers when we read this, but Ahluwalia’s slot was its first ever LFW runway. Like, how? Anyhow, it was a blast; drawing on Nollywood and Bollywood and the romantic imagery of both worlds, it saw retro movie poster graphics go head-to-head with Priya’s usual, gorgeous seventies hues. Wavy, asymmetrical patterns, patchwork tartan and sartorial pinstripes dominated, plus very-in-vogue wide shoulder coats, gorgeous saris and towering statement hats. While its sustainable features have been underlined less prominently compared to her previous collections, deadstock fabrics are mixed-and-matched throughout, tactically remaining tacit to keep the story centre stage.

COFFEE LEATHER IS A THING NOW

Eirinn Hayhow’s faerie world is a treat to delve into, its elfin characters, whimsical fabrics and lysergic biomes bringing her clothes to life. Ever interested in creating new biomaterials, Eirinn has introduced novel natural dyes made from plant, food waste and even bacteria for her new collection ‘Tree People’, applied to crochet hats, tie-dye tops and billowing, mushrooming dresses. Most wildly, she’s synthesised a ‘coffee leather’, a flexible, durable vegan alternative to the real thing that actually – yes – smells of coffee. It’s going to be expanded in her September collection, so hopefully, you’ll be able to wear an entire lungo on yourself. See, we told you the Fashion Week calendar is like breakfast…

Lovable rogue and mischievous bootlegger Sports Banger was at it again this year, making up for lost time with a serotonergic, deliciously chaotic show. Off-schedule and moved to the studio beside him due to pesky Eunice, it saw him round-up old friends (Anna Lomax, Emma Brewin, Charlie McCosker) and the energy of sponsor Lucozade to remix his cult creations. Deadstock ‘HM Government Truth Twisters’ tees were origami-ed into a twirling skirt, old Slazenger Banger faves were resurrected and a Chanel toilet seat found in a Manchester market made its way onto the runway.

Continuing the rave vibes, Banger also collaborated with Acme Whistles to upcycle their blowers into a couture dress, recalling Paco Rabanne’s ‘Unwearables’ collection and likely to cost you an absolute nuclear bomb if you ever picked it up in a Kilo sale. Reduce, Reuse, Recycle, Rave, Repeat?

‘That’s so Lynchian’, part of the art school lexicon, used to strictly refer to David Lynch’s cinematic works. Designer Robyn Lynch, though, has spun such a trademark aesthetic that she might be able to lay claim to the adjective. Once again collaborating with heritage sportswear brand Columbia, the collection saw ten new jackets made from the brand’s deadstock pieces, matched with sturdy boots and, headgear of the moment, knitted ballies. Even thriftier was her use of her Dad’s old Dublin GAA jerseys, given a new lease of life via technical knits, paired with sporty shorts that actually made us want to go and do a bit of exercise.

GROW YOUR OWN WAY:
LAZY OAF DROP THEIR SS20 COLLECTION

UNDERSTANDING
the allure of VINTAGE CLOTHES

READY FOR THE DROP?
TOMMY TEAM UP WITH A BATHING APE